This collaborative project (coordinated by Burlington artist and activist Michelle Sayles) was exhibited at the 2016 ArtHop.

The work consists of a series of canvas panels, each inspired by one of the seven couplets of the poem Think of Others by the late Palestinian poet Mahmoud Darwish.
The participating artists were: Delia Robinson, Jen Berger, Betsy Kelly, Marita Canedo, Robert W. Brunell, Michelle Sayles and Greg Giordano

Mahmoud Darwish was one of the world’s pre-eminent poets. He published more than 30 volumes of poetry and eight works of prose. His public readings were major cultural events, and many of his poems were set to music.

He was a son of Palestine, and was recognized internationally as its national poet. His work is revered by millions of Palestinians in Israel, the occupied territories, and in the Palestinian Diaspora. He was born in the village of al-Birwa, in the western Galilee, in 1941, and died in 2008.

Although identified with the land and indigenous people of Palestine, Darwish, who lived most of his adult life in exile, described himself as a man of both Palestinian Jewish and Arab cultures. When a just peace and reconciliation comes to Israel-Palestine, “the Jew will not be ashamed to find an Arab element in himself, and the Arab will not be ashamed to declare that he incorporates Jewish elements,” he wrote.
The American poet and songwriter Naomi Shihab Nye, when commenting on Darwish’s work for the collection Unfortunately It Was Paradise, wrote: “[T]he style here is quintessential Darwish—lyrical, imagistic, plaintive, haunting, always passionate, and elegant – and never anything less than free – what he would dream for all his people.”

This project is available for loan.
If you have a suitable venue to display the 10 panels (each 40 inches wide by 72 inches high) please contact the coordinating artist (Michelle Sales) or VTJP. 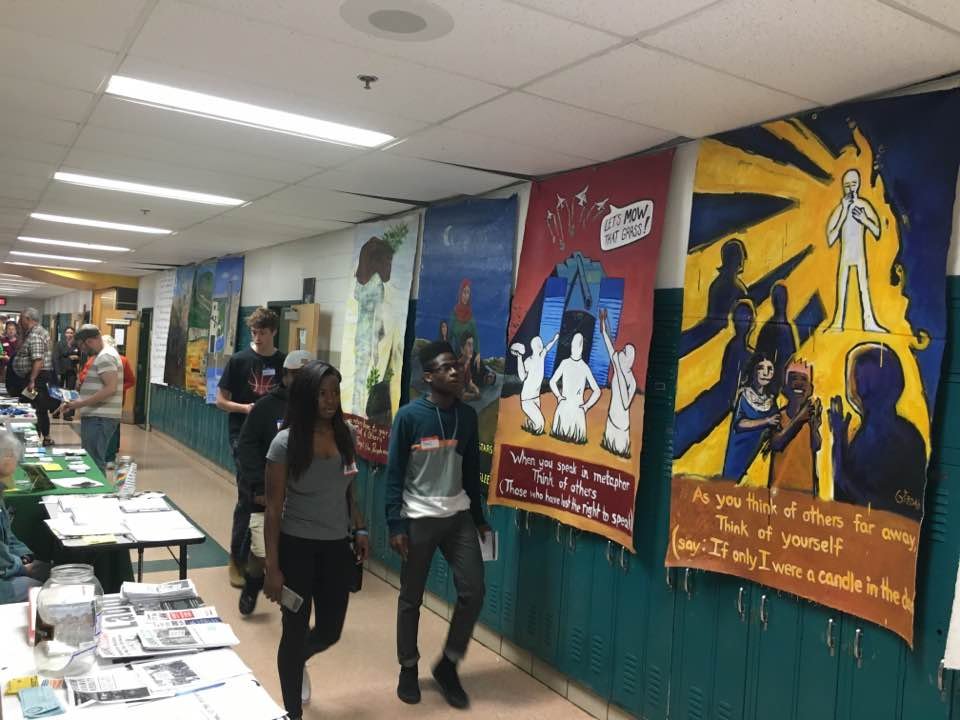 As you prepare your breakfast, think of others
(do not forget the pigeon’s food).

As you wage your wars, think of others
(do not forget those who seek peace).

As you pay your water bill, think of others
(those who are nursed by clouds).

As you return home, to your home, think of others
(do not forget the people of the camps).

As you sleep and count the stars, think of others
(those who have nowhere to sleep).

As you express yourself in metaphor, think of others
(those who have lost the right to speak).

As you think of others far away, think of yourself
(say: If only I were a candle in the dark).