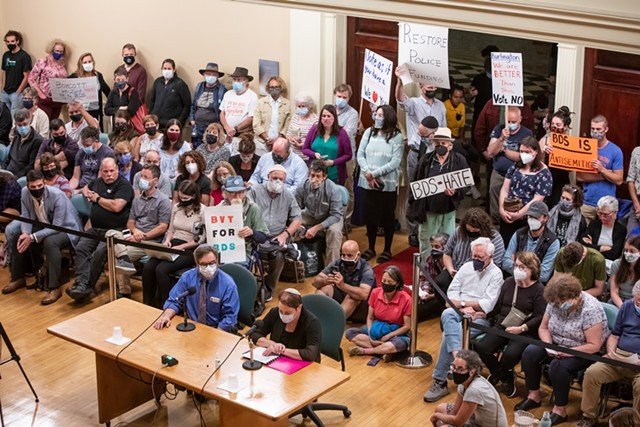 Vermonters for Justice in Palestine (VTJP) and seventeen other organizational sponsors brought the Resolution proposal to Burlington City Council and it was approved by the Racial Equity Committee.
Livestream recording of the Resolution hearing, September 13th – on YouTube (5 hours!)
ο Opponents of the the Resolution mounted a fierce opposition fueled by an article from four Burlington Rabbis in the Vermont Digger here.  (See excellent response in the VT Digger by Marc Estrin here and by Ashley Smith here )
ο And the Rabbi’s position echoed in some respects by Mayor Miro Weinberger  here.

VTJP put forward several points to emphasize when discussing the issues around BDS and justice for Palestinian people.

And Burlington’s Fletcher Free Library hosted a Webinar about the Resolution with panelists Wafic Faour and Ali Dieng.

Opponents of the the Resolution mounted a fierce opposition fueled by an article by four Burlington rabbis in the Vermont Digger, followed by a response by Marc Estrin. The Rabbis’ position was echoed in some respects by Mayor Miro Weinberger.

The Resolution was offered by Councilor Ali Dieng and sponsored by Vermonters for Justice in Palestine, and 18 endorsing organizations.
There were passionate statements for and against at the Council meeting on September 13th and it was eventually withdrawn by Councilor Dieng.
Here is a detailed analysis of the Resolution offered by Richard Silverstein in his blog Tikun Olam.