This year 2017: Three significant anniversaries:
1917:
The Balfour Declaration in which Great Britain stated it favored the establishment of a Jewish “national home” in its colony of Palestine.
1947:
UN General Assembly Resolution 181 and the partitioning of Palestine.
1967:
Six-Day War June 4th-11th, and the occupation of the West Bank, East Jerusalem, Gaza, Golan, and Sinai.

1917 – Balfour Declaration (by the British Government):

“His Majesty’s government view with favour the establishment in Palestine of a national home for the Jewish people, and will use their best endeavours to facilitate the achievement of this object, it being clearly understood that nothing shall be done which may prejudice the civil and religious rights of existing non-Jewish communities in Palestine, or the rights and political status enjoyed by Jews in any other country.” 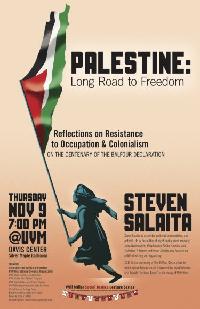 Steven Salaita, a scholar, political commentator and activist spoke on "Palestine: Long Road to Freedom – Reflections on Resistance to Occupation & Colonialism on the Centenary of the Balfour Declaration"
on November 9, 2017,at the Uinversity of Vermont.

Steven Salaita is the author of 8 books, most recently Inter/Nationalism: Decolonizing Native America and Palestine.
A recording of his presentation can be seen online
Sponsored by:
Will Miller Social Justice Lecture Series
Vermonters for Justice in Palestine
University of Vermont (UVM) International Socialist Organization, and others. 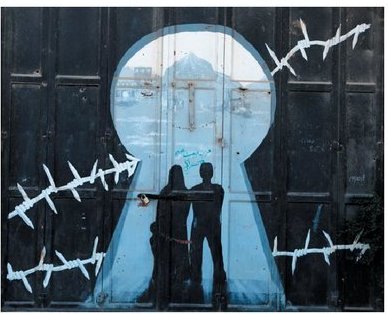 BALFOUR’S LEGACY: Confronting the Consequences
Saturday, November 11, 2017, 8:00am 6:00pm
The First Parish in Cambridge: 3 Church Street Boston, MA, 02116.
This conference marks the 100th anniversary of the Balfour Declaration, which committed Britain to the establishment of a ‘national home for the Jewish people’ in Palestine without consulting the indigenous population. It will explore the consequences of this British commitment, and what lies ahead.
Video recordings on YouTube

The resolution recommended the creation of independent Arab and Jewish States and a Special International Regime for the city of Jerusalem. The Partition Plan, a four-part document attached to the resolution, provided for the termination of the Mandate, the progressive withdrawal of British armed forces and the delineation of boundaries between the two States and Jerusalem. Part I of the Plan stipulated that the Mandate would be terminated as soon as possible and the United Kingdom would withdraw no later than 1 August 1948. The new states would come into existence two months after the withdrawal, but no later than 1 October 1948. The Plan sought to address the conflicting objectives and claims of two competing movements, Palestinian nationalism and Jewish nationalism, or Zionism. The Plan also called for Economic Union between the proposed states, and for the protection of religious and minority rights.
The Plan was accepted by the Jewish Agency for Palestine, despite its perceived limitations. Arab leaders and governments rejected it and indicated an unwillingness to accept any form of territorial division, arguing that it violated the principles of national self-determination in the UN Charter which granted people the right to decide their own destiny.
Immediately after adoption of the Resolution by the General Assembly, a civil war broke out and the plan was not implemented. As a consequence, the 1948 Palestinian exodus, also known as the Nakba, occurred when more than 700,000 Palestinian Arabs fled or were expelled from their homes. [Adapted from Wikipedia]
Later, United Nations General Assembly Resolution 194 was adopted on December 11, 1948, near the end of the 1948 Arab-Israeli War. The Resolution defined principles for reaching a final settlement and returning Palestine refugees to their homes. It resolved that “refugees wishing to return to their homes and live at peace with their neighbours should be permitted to do so at the earliest practicable date, and that compensation should be paid for the property of those choosing not to return and for loss of or damage to property which, under principles of international law or equity, should be made good by the Governments or authorities responsible.” (Article 11)

At the end of this conflict, Israel had occupied Gaza, East Jerusalem, the West Bank, the Golan Heights, the Sinai peninsula.

Weir, Alison.: Against our better judgment: the hidden history of how the U.S. was used to create Israel.
Publisher: CreateSpace (Charleston, N.C.)
This book provides a lesser discussed aspect of the Balfour Declaration, investigating the apparent influence of wealthy American Zionists on policies of both the U.S. and Britain, especially relating to the U.S. eventually fighting with Britain in World War One.
Details here